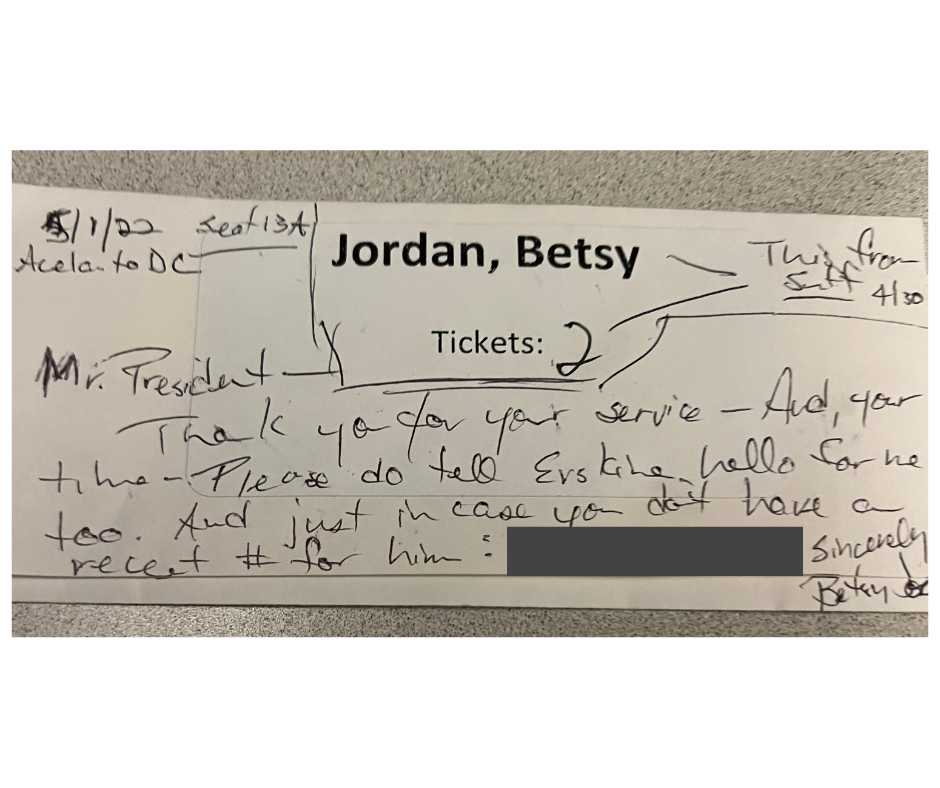 As I walked up the stairs of the Metropolitan club in the train station, I saw the plainly dressed officers milling about. I saw the dogs and the officers wearing yellow vests and badges as they checked out the lockers on the main floor. My heart skipped a beat, as one’s heart will do when confronted with what seems like a dangerous situation!

Within minutes I realized what was happening. The former leader of the free world, the Hon. Bill Clinton was sitting in a booth reading a periodical. Other than law enforcement there were three other passengers and three or four attendants in the room. Clearly there were no speeches to be given!

I thought I really would like to get a picture of this. And then I realized there was a conversation I like to have with him. So I asked one of the Stoic plainclothes men if I could approach.

It all seemed surreal. Earlier in the day I had changed my train departure three times. As I did so, I wondered, what in the world? Try as I might, I couldn’t find any method to my madness.

Why ask why? It takes me into a psychological assessment every time. What I really need to know at this moment is that I’m going down the correct path. one which leads me to an extraordinary life experience and one where there are no regrets. It’s important that I listen to my intuition. This is my reward.

“Mr. Pres.” as I felt him take my hand I slid into the booth opposite him. We were two people, two citizens, having a nice conversation. I had seen his wife the day before at a performance called SUFF, (I’ll cover this in a later blog.)

There was a lot on his mind. He seemed to be concerned about the direction of the country, naturally, we all are. His thoughts turned to what was happening with the media. I asked him what he thought would happen with Elon Musk and his purchase of Twitter.

He mentioned something called false equivalency, his experience with the media during Hillary’s run for president was and I paraphrase, that major newspapers the New York Times the Washington Post were reporting something negative about one candidate, therefore feeling like they needed to report something negative about the other candidate, whether or not those equivalencies were correct or real. It reminded me that I’ve had similar thought. Somehow fairness gets logged into a pseudo-objectivism so that what becomes ethical, or moral, or right becomes so watered down because we want to either sell something, befriend someone, not offend, not lose, not be wrong.

He said, “Bezos actually saved the Washington Post.” So if Elon Musk tells folks at Twitter basically to be authentic, to report, not CENSOR, we may see the results that amount to free speech, free thinking,

But Twitter is not a publication and I don’t experience Elon Musk as neutral or tolerant. And, as our former leader said, once Twitter became public, there was not much that could be done to stop Musk from a takeover. The only avenue for that would be the justice department through antitrust laws potentially.

Who could have predicted that Comey would reintroduce an email question had already been addressed? This was on his mind … The false equivalencies used in the New York Times. (One which became the equivalent of felonious activity by the other candidate. ) When are we being manipulated, and when are we not?

All I know is that these are important questions of our time. How do you weed out the wheat from the chaff?

And Besos, for all his foibles, saved the Washington Post by saying that despite his ownership, journalists should be journalists. Elon Musk, will you rise to that challenge?

And is there one truth? President Clinton also raised this question, “Isn’t truth perception after all?”

I was glad I overcame my nervous shyness to risk rejection when I approached such a powerful person. Though there were no conclusions drawn and the time was so short, I’m happy to say that I was not rejected, walked away with no regrets, and lots to think about!

Where do you let your fear of rejection lead you? What if you risked and “played to win”, rather than “not to lose”? Do you come up with false equivalencies of your own? Do you immediately jump to a conclusion due to a sense of pseudo-fairness? In an attempt to be fair, do you lose a sense of uniqueness, of true objective thought? In an attempt to persuade, are you merely accepting one side of an issue and censoring another side? Can we be content with sitting in the question and not having the answers?

The red cap approached and I shared him with two women from Baltimore. They had observed my conversation from afar. They both asked, “Was he nice?” I thought this was an odd question. Later, the fellow diligently guiding us through the tunnels asked, “Yeah, who is that? And was he nice?”

This question had never even occurred to me. The realization dawned on me that the man sitting across from me in that booth, treated me as equal. His humility and kindness were apparent, and he’s someone of enormous power and confidence.

Was he nice? Absolutely. Is that a question we need to ask about our leadership today and everyday? Yes. What these citizens know and I’m relieved to be seeing is that this is the only question, for kindness can change the world!